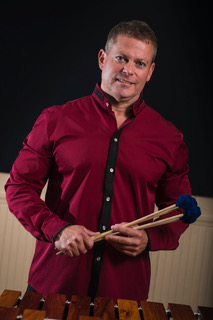 Praised by Percussive Notes Journal as “A Master of Musical Nuance”, Andy Harnsberger enjoys a versatile career as a performer, composer, and educator. He has performed in musical venues across North America, South America, Australia, Japan, and Europe, and presents numerous solo recitals and clinics throughout the United States each year. He has been a featured artist in many festivals around the world and was on the artist/faculty for the Sulzbach-Rosenberg/Interharmony International Music Festival in Germany in 2014, 2015, 2017, and 2018. He has been a featured solo artist twice at the Percussive Arts Society International Convention (PASIC), and has presented several clinics as well. He has also appeared as a guest clinician at numerous Percussive Arts Society Days of Percussion. His compact disc, “Vertigo,” has been recognized by the Percussive Arts Society as “a must purchase for anyone who collects important marimba recordings…His performance makes it clear that he is a master player, not only technically, but musically as well.”

Andy Harnsberger is Associate Professor of Music and Percussion Coordinator at Lee University in Cleveland, Tennessee. He earned his Doctorate of Musical Arts in Performance and Literature at the Eastman School of Music in Rochester, New York, where he also received the prestigious Performer’s Certificate. Andy’s Signature Series mallets are available from Malletech, and he is a performing artist and clinician for Malletech Instruments and Mallets, Remo Drum Heads, Sabian Cymbals, Ltd., and Grover Pro Percussion.