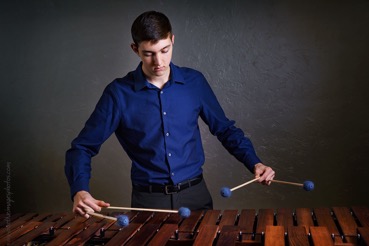 Austin Keck is an American percussionist currently studying Music Performance at the Eastman School of Music. As an active performer, Austin has performed all over the United States, and been the featured soloist on numerous concerts and festivals such as the National Percussion Festival in Indianapolis, IN.

Prior to his studies at The Eastman School of Music Austin has been a performing member of various marching and classical ensembles such as the Santa Clara Vanguard Drum and Bugle Corps and The Lone Star Youth Orchestra. While at Santa Clara Vanguard Austin received two first-place percussion titles, as well as both a silver and gold medal at the Drum Corps International World Championships.

Austin has performed and competed in numerous international and state level percussion competitions, where he has received first prize numerous times. Some of his most recent accolades include being selected as a Yamaha Young Performing Artist, and 1 st prize at the Great Plains International Marimba Competition in both 2016 and 2019. Austin has attended and performed at many international masterclasses, learning from leading performers in the industry such as She-e Wu, Katarzyna Mycka, Christopher Deane, Pius Cheung, Marta Klimasara, Gordon Stout, Christopher Lamb, Sandi Rennick, Brian Zator and many others. Austin’s teachers include Mark Ford, Paul Rennick, and Michael Burritt.