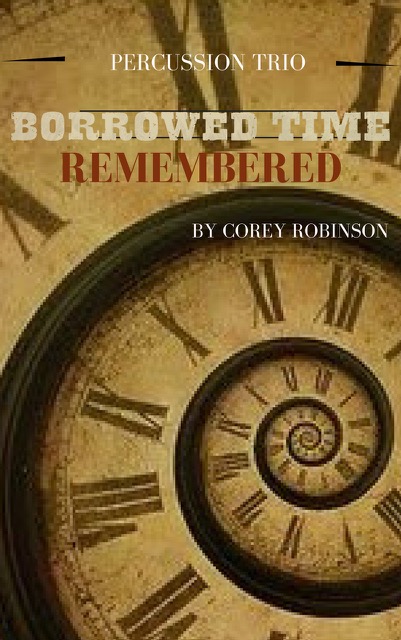 Borrowed Time Remembered for percussion trio is derived from the first four chords of Bill Evans’ jazz standard Time Remembered. THe vibraphone leads the ensemble through much of the form while the hocketed drum parts provide rhythmic accompaniment.  Each performer requires a long, scrapable object alongside small, traditional percussion set-ups.

Corey Robinson currently serves as the Adjunct Instructor of Percussion at the University of Texas at Tyler and at Texas Woman’s University. He also serves as the Assistant Percussion Director at Flower Mound High School, in Flower Mound, Texas. He has performed duet recitals of his own compositions at conventions such as the World Saxophone Conference (Strasbourg, France) and two North American Saxophone Alliance Conferences (Lubbock, Texas and Cincinnati, Ohio). As an ensemble member, he has performed at three PASIC conventions: two at percussion ensemble showcase concerts with Indiana University and the University of North Texas and once as a member of the PAS 50th Anniversary Marimba Orchestra. The University of North Texas Percussion Ensemble premiered Corey’s composition, Twisted Metal, at the PASIC in 2016. He has also recorded and performed with the University of North Texas Wind Symphony including at a featured performance at the 2015 Midwest Band and Orchestra Clinic (Chicago, IL).

There are no reviews yet.

Be the first to review “Borrowed Time Remembered” Cancel reply