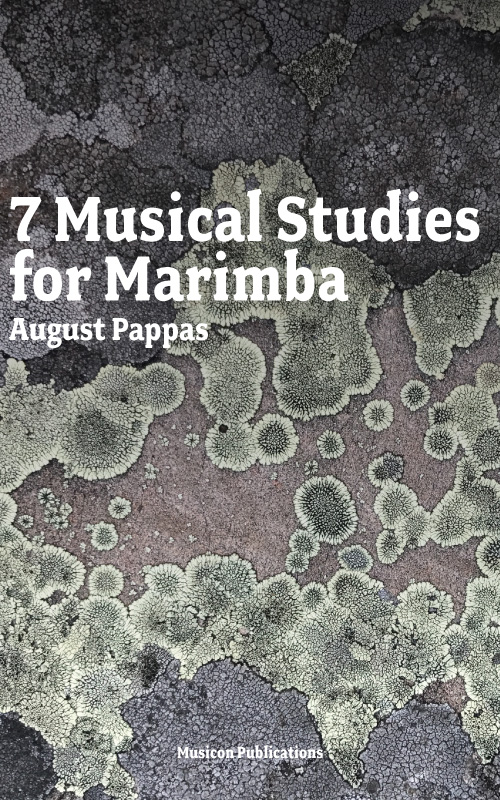 Are you ready for contemporary marimba etudes that have heart and soul?   Check out August Pappas' 7 Musical Studies for Marimba.   This collection is perfect f

Are you ready for contemporary marimba etudes that have heart and soul?   Check out August Pappas’ 7 Musical Studies for Marimba.   This collection is perfect for the intermediate marimbist!   Written for 2 and 4 mallets on a 4.3 octave marimba, each Study has a unique musical character that offers the player opportunities for development of expressive concepts and technical skills.   But Pappas’ music is much more than student etudes.   These are also performance works that could be played individually or in sets on student recitals or concerts.   The music is captivating and the technical challenges and overall length of each Study is perfect for the intermediate high school or college marimbist.   Teachers will appreciate these 7 Musical Studies for Marimba as exceptional instructional works, and audiences will love them for their expressive character and musical sensitivity.

Musicon Publications is proud to offer 7 Musical Studies for Marimba.  Congratulations to August Pappas on his outstanding music!

Prelude (Prelude Video)
Inspired by the Well Tempered Clavier, this etude is meant to serve as a prelude that is both a tribute and expansion to Bach’s music often performed on solo marimba. There are relatively few instructions in terms of dynamics and phrasing, the performer is encouraged to find their unique expressive voice. That being said, this piece should be thought of as a prelude, meaning that it is a beginning, or introduction. I would recommend a light touch and nimble approach with focus on the phrase direction and release. It should never feel heavy or labored

Hunt (Hunt Video)
As suggested by the instruction of “hastily”, Hunt is meant to be a breathless dash of accents, scales, and odd meter groove. When I play this, I visualize a cinematic event, perhaps a car chase or action sequence, and that helps me to bring out the excitement and momentum of the different sections. The beginning should grow from nothing, a steady build to the first peak at bar 25. Similarly starting at bar 32, the idea is to slowly build a massive 29 bar crescendo with each new added element inflating the tension. The performer should have fun with the last 10 bars as the theme is restated and finally, the last upward scalar run disappears into nothing. This Etude is written for 2 mallets.

Breath (Breath Video)
Breath is all about the contrast between the two hands. That contrast manifests itself in a variety of ways. Whether polyrhythmic (the opening hemiola), or dynamic (the contrasting crescendos starting in bar 20), or regarding phrasing (beginning in bar 30), independence between the left and right hand is crucial. More so than the first two etudes, I would encourage the performer to let the tempo push and pull between the phrases. The overall mood of the piece encourages lots of expressive decisions. In the final section beginning at bar 38, the two hands are meant to meld together, while the tenutos still set them apart they should coming across as one cloudy phrase, as opposed to two independent voices.

Flight (Flight Video)
This piece is meant to be a challenge to the performer to bring out melodies and phrases from a permutated odd meter pattern. There are tenutos marked to guide where the primary melody takes place, but there are counter melodies to be found in the unstressed notes and those can be brought out with the proper independence between the mallets. Bars 17-18 and 37-38 are homages to one of my favorite harmonic progressions (the first minor, the second major) often found in pop music. Please be as ornate with the phrasing of these sections as you would like, they are meant to be romantic and lush.

Murmur (Murmur Video)
More so than any of the other etudes, Murmur presents a very specific technical challenge. It is based around the permutation 4312, and this piece should be approached with intent of playing that pattern with smooth double-lateral strokes. While it may be necessary while practicing at slower tempos, the performer should not be “stroking out” each note, but letting the double-lateral strokes fall easily. The melody that is restated three times is slightly naive in nature, and I would encourage the performer to make decisions that bring out that character. The 32nd note passages in bars 28 and 30 should be rolling waves of notes, and keeping strict time in that section is not important.

Strobe (Strobe Video)
Strobe is inspired by a few of my favorite composers, including Marc Mellits, Phillip Glass and Steve Reich. The syncopated odd meter rhythmic base and the minimalism of the harmonic content is a tribute to the music that made me fall in love with marimba and percussion in the first place. Similar to Prelude, there are few instructions in terms of dynamics and phrasing. You should use the long harmonic phrases to make music in the way that best suits you, just don’t forget the funk.

Dusk (Dusk Video)
Consider Dusk an epilogue, it is meant to be a poignant close to this collection music. The challenge here is to let the whole-note melodies in mallet 4 sing with a clear full tone while the murmuring eighth note lines beneath it provide a bed of warm harmony. Repetition is meant to encourage development of the phrases. Be wary of the danger of letting the repeats stagnate. Lastly, the final 6 bars are echoes that should wistfully disappear into silence. The half notes and whole notes are not rolls, but the player can insinuate sustain through their stroke and resonance of sound.

There are no reviews yet.